Hydraulic turbines for all with Turbulent

Elected “start-up of the year 2015”, this budding Belgian start-up owes its success not only to its technology but also to the concept itself: eminently simple and even delightfully retro.

The idea put forward by Jasper Verreydt and his partner Geert Slachmuylders is to replace old watermills by the cutting-edge vortex turbines they have designed. In Europe alone, 350,000 potential sites have been identified!

Can you tell us a bit more about your innovation?

It’s simply the modern version of watermills: a turbine driven by a small watercourse and producing renewable electricity.

Is it really new?

On this scale, yes. Major electricity producers use run-of-the-river turbines, but for very high-powered applications: on rivers, with dams, and significant environmental impacts. Our turbine is very different. Firstly because it uses the vortex principle, which provides optimum mechanical efficiency even with a small water fall (3 metres is sufficient). Secondly because it does not require any engineering works (no dam) and it lets fish through. Thirdly because it yields small amounts of power (5kW -100kW) at a reasonable cost for purchase, installation and operation (easy maintenance). This completely opens up the hydropower market.

Even to private individuals?

Yes, of course. Starting with everyone who owns an old watermill: businesses, private individuals, municipalities and so on. Lots of sites would be easy to equip: around 350,000 sites in Europe alone, according to a recent study by Restore HydroPower. With a return on investment of around five years and the prospect of using 100% of the power you generate, we believe our turbine is clearly commercially viable.

So you’re going to sell your turbines to the end users?

For the time being, we are analysing the data from our first prototype, installed in January 2016. The energy generation is as we expected, but we still have to work on optimising, integrating and industrialising the subsystems. We hope to put it on the market in late 2016. First on a direct-to-customer basis, subcontracting the production and installation. Then probably through an Energy-as-a-Service model, in which we bear the cost of the initial outlay and operation in return for a subscription/consumption formula. In the longer term, we will probably have to licence the technology in order to enter international markets.

How are you financing your development?

We’re relatively reasonable about this point! The seed financing by KIC InnoEnergy (along with the various grants and subsidies obtained) in 2015 came to €250,000. We are going to undertake a first round in 2016 for the same amount. After that, we’ll probably need a second, more significant round, but we think it’s important to remain fairly frugal when it comes to capital. We are also receiving a lot of advice and guidance from KIC InnoEnergy in our endeavours to be efficient. They are helping us with a lot more than financing: patents, legal aspects, marketing and sales, technology… After all, energy, like money, is a valuable resource. There’s no point in wasting it!

Vortex turbine in the laboratory 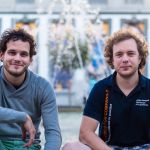 We are here to help and look forward to welcoming you to The Business Booster 2023 in Amsterdam! Should you have any questions regarding the event and your participation, please refer to our list of FAQs below. If you can’t find what you are looking for, please contact us.

Please check the website regularly and subscribe to The Business Booster newsletter to receive all the latest news and updates regarding the event.

For information about travel in Europe please visit: www.reopen.europa.eu/en

Your registration package will vary depending on the option you choose, whether it’s a full entry ticket or one day ticket.

Full entry tickets are: Valid for two days, give you access to the exhibition and all conferences, as well as refreshments and lunch, event materials and access to the networking tool.

One day tickets are valid for the day you purchase your ticket for, giving you access to the exhibition and all conferences as well as refreshments and lunch for one day, event materials and access to the networking tool.

You can pre-register here

Your registration includes entry to all keynotes, roundtables, and parallel and pitching sessions.

However, a B2B tool will be made available prior to the event, that will facilitate your B2B meetings with exhibitors and innovators at the event.

The official language of the event will be English. Please note, no translation services will be provided.

The cancellation policy will be published when registration opens.

We will provide a secure area for luggage.